KLAYMAN: THE AG MERRICK GARLAND WE THE PEOPLE DO KNOW IS A LEFTIST SLEAZE & CRIMINAL!
Order "It Takes a Counter-Revolution!" at Amazon.com
Donate and Support Freedom Watch at www.FreedomWatchUSA.org 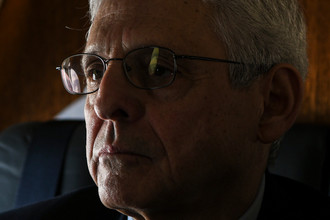 The Merrick Garland You Don't Know
By Ankush Khardori
POLITICO
January 15, 2023
When Merrick Garland took center stage late last year to announce the appointment of a special counsel to oversee the ongoing criminal investigations concerning Donald Trump, it was not the first time that the mild-mannered former judge had taken on the role of the tortured moralist at the center of an epic and unspooling drama.

As a high school student in suburban Chicago in the late 1960s, the man who is now the attorney general played the lead role in J.B. — a modernized, Pulitzer Prize-winning retelling of the Biblical story of Job by the playwright Archibald MacLeish. In the play, two characters who serve as surrogates for God and the Devil decide to test the faith of the titular character, a prosperous and devout New York banker — described as a "perfect and an upright man" — who is forced to deal with the loss of his children, his wealth and his health. MacLeish was grappling with the horrors of the first half of the 20th century and, as he put it in a foreword to the play, the ways in which "the enormous, nameless disasters which have befallen whole cities, entire peoples, in two great wars and many small ones, have destroyed the innocent together with the guilty — and with no 'cause' our minds can grasp."