KLAYMAN: BIDEN'S ONLY DEFENSE: I AM BRAINDEAD AND HAVE AN IQ SLIGHTLY HIGHER THAN THE MENTALLY RETARDED! THIS IS ACTUALLY TRUE AND NOT SATIRE!
Order "It Takes a Counter-Revolution!" at Amazon.com
Donate and Support Freedom Watch at www.FreedomWatchUSA.org 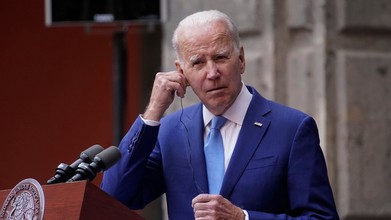 Democrats worry Biden controversy will be Clinton emails repeat
The Hill
January 14, 2023
Democrats are increasingly worried that the controversy surrounding the classified documents found at President Biden's Wilmington, Del., home and at his former office will loom large over his expected reelection campaign.

While Democrats say they remain confident that Biden can overcome the problem, they say the disclosure of numerous batches of classified documents complicates matters for the president ahead of his campaign launch.

Privately, they wonder how tough it will be for Biden to explain what happened and draw comparisons to 2016 Democratic presidential nominee Hillary Clinton's email controversy, in which the former secretary of State admitted to using a private email account while doing government business.