KLAYMAN: LET'S ALSO REMEMBER THAT PELOSI & THE REST OF THE CLOWNS AND CRIMINALS IN CONGRESS ON CAPITOL HILL FIGURATIVELY HAVE A GUN TO OUR HEADS!
Order "It Takes a Counter-Revolution!" at Amazon.com
Donate and Support Freedom Watch at www.FreedomWatchUSA.org 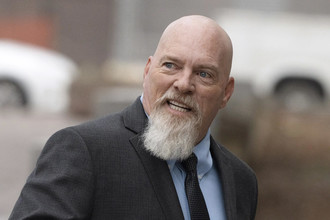 Capitol riot trial starts for man with feet on Pelosi desk
AP NEWS
January 11, 2023
WASHINGTON (AP) — An Arkansas man who propped his feet on a desk in then-House Speaker Nancy Pelosi's office during the riot at the U.S. Capitol planned the trip for weeks and came prepared for violence, a prosecutor said Tuesday as his trial got underway.

Richard "Bigo" Barnett had a stun gun tucked into his pants when he stormed the Capitol, invaded Pelosi's office and posed for a photo that became one of the attack's more well-known images, prosecutors said. He also took a piece of her mail and left behind a note that said, "Nancy, Bigo was here," prosecutors said. Barnett punctuated the message with a sexist expletive.