KLAYMAN: OUTRAGEOUS: CORRUPTED TRUMP JUDGE SHOULD HIMSELF DO TIME!
Order "It Takes a Counter-Revolution!" at Amazon.com
Donate and Support Freedom Watch at www.FreedomWatchUSA.org 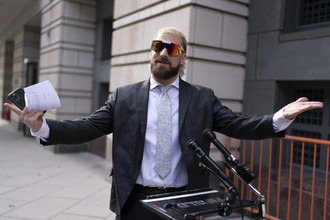 Judge sentences 'Baked Alaska' to 60 days in jail for Jan. 6 conduct
By Kyle Cheney
POLITICO
January 10, 2023
A federal judge sentenced pro-Trump livestreamer Anthime "Baked Alaska" Gionet on Tuesday to 60 days in prison for his actions at the Capitol on Jan. 6, calling his raucous conduct "shocking" amid the chaos of the mob.

U.S. District Court Judge Trevor McFadden, a President Donald Trump appointee, said Gionet made a "mockery of democracy," live streaming while he marauded through the Capitol, swore at Capitol Police officers trying to force him to leave and entered the private offices of two senators.