KLAYMAN: RONNA MCDANIEL SHOULD BE HAPPY SHE STILL HAS A JOB: ALBEIT WITH A COMPROMISED AND MORIBUND POLITICAL PARTY THAT HAS BETRAYED CONSERVATIVES AND WE THE PEOPLE REPEATEDLY!
Order "It Takes a Counter-Revolution!" at Amazon.com
Donate and Support Freedom Watch at www.FreedomWatchUSA.org 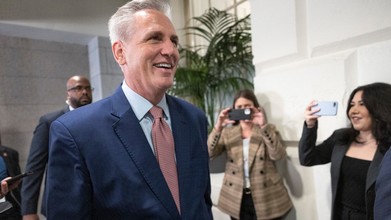 "As long as we're fighting each other, we are not keeping our eye on the prize," McDaniel said on "America Reports" as lawmakers cast their votes. "I think we have to get the speakership settled and we have to go forward if we're going to be successful in 2024 as a united party. And right now, this exemplifies exactly what the Democrats want to see from our party."

A historic second round of voting resulted in 203 votes for McCarthy, 212 for Democratic Leader Hakeem Jeffries, D-N.Y., and 19 Republican votes that went to Rep. Jim Jordan, R-Ohio.