KLAYMAN: THE LEFT BEING CHALLENGED IS THE RESULT OF THEIR OWN DICTATORIAL EVIL TREATMENT OF THE PEOPLE!
Order "It Takes a Counter-Revolution!" at Amazon.com
Donate and Support Freedom Watch at www.FreedomWatchUSA.org 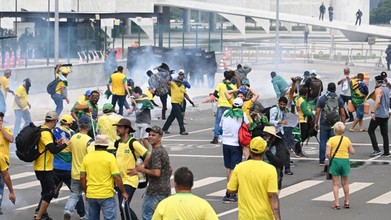 In a news conference, Lula da Silva described events in the capital Brasilia as "barbaric" and said "a lack of security" had allowed Bolsonaro's "fascist" supporters to breach barriers set up by the Armed Forces outside the congressional building, the Supreme Court and the Planalto Presidential Palace.

"These people are everything that is abominable in politics," he said, adding that "all the people who did this will be found and punished."