KLAYMAN: MR. TRUMP: I WOULD NOT TAKE CREDIT FOR SUPPORTING MCCARTHY, A WORTHLESS, INTELLECTUALLY LIMITED, TWO FACED RHINO WHO AFTER JAN. 6 WANTED YOU REMOVED FROM THE PRESIDENCY! WHAT ARE YOU SMOKING DONALD!?
Order "It Takes a Counter-Revolution!" at Amazon.com
Donate and Support Freedom Watch at www.FreedomWatchUSA.org 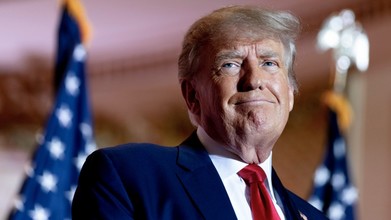 "The Fake News Media was, believe it or not, very gracious in their reporting that I greatly helped Kevin McCarthy attain the position of Speaker of the House," Trump wrote in a post on his Truth Social platform on Saturday.

"Thank you, I did our Country a big favor!"

Although there was talk of Trump's weakened political clout after Republicans opposed to McCarthy's Speakership bid ignored the former president's urging to back him, reports throughout the days-long voting process showed that Trump may have successfully swayed some of McCarthy's GOP detractors.