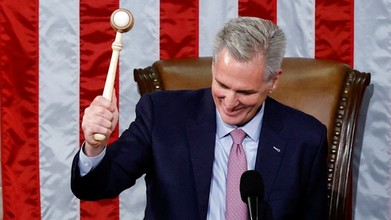 Representative Kevin McCarthy, a Republican from California, center, after becoming House speaker during a meeting of the 118th Congress in the House Chamber at the US Capitol in Washington, DC, US, Saturday, Jan. 7, 2023. McCarthy achieved his long-held ambition of becoming House speaker after quelling a rebellion by GOP conservative hardliners, but at the cost of further weakening his precarious position within a sharply divided party.

The U.S. House of Representatives elected GOP leader Kevin McCarthy of California as speaker in a dramatic 15th vote early Saturday, after a contentious four days and 14 failed ballots — the longest the chamber has gone leaderless in a century.