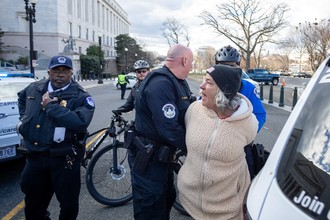 Ashli Babbitt's mother arrested on Capitol riot anniversary
By Ellie Silverman
Washington Post
January 7, 2023
Micki Witthoeft, the mother of Ashli Babbitt, was arrested for blocking traffic on Capitol grounds on Friday, the two-year anniversary of the death of her daughter after she stormed the building in a pro-Trump mob.

Witthoeft, 58, was arrested around 1:45 p.m. for failing to obey police orders and blocking and obstructing roadways, according to a statement from U.S. Capitol Police. The group did not have a permit to demonstrate, the statement said, and Witthoeft "asked to be arrested."

As is routine in these types of arrests, she was processed, given a citation to appear in court and released, the statement said.

The arrest came as other groups opposed to the events of Jan. 6 rallied outside the Capitol on the anniversary of the insurrection, decrying what they viewed as the unraveling of hard-earned civil rights.