KLAYMAN: MCCARTHY WANTS TO BE SPEAKER FOR HIS OWN PERSONAL AMBITIONS: HE IS AN UNPRINCIPLED LOSER LIKE THE REST OF THE REPUBLICAN ESTABLISHENT!
Order "It Takes a Counter-Revolution!" at Amazon.com
Donate and Support Freedom Watch at www.FreedomWatchUSA.org 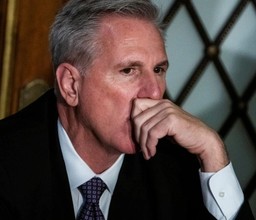 McCarthy May Break Impasse on Speakership Thursday
By John Gizzi
Newsmax
January 5, 2023
After six ballots and still not being any closer to the speakership than when the votes began on the House floor, Kevin McCarthy may be poised to finally break the impasse that has kept him from his longtime dream of wielding the speaker's gavel.

Sources close to the embattled House Republican leader said his campaign team agreed Wednesday night to a proposal floated by the conservative Club for Growth to win over enough of the 20 House Republicans who have continuously voted for candidates other than McCarthy for speaker — and thus denied the Californian the 217 necessary to win.