KLAYMAN: THIS IS TYPICAL BS BY TWO-FACED NEWSMAX WHICH IS RUNNING INTERFERENCE FOR CORRUPT KEVIN MCCARTHY!
Order "It Takes a Counter-Revolution!" at Amazon.com
Donate and Support Freedom Watch at www.FreedomWatchUSA.org 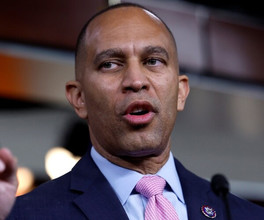 Caucus Members Tell McCarthy They're OK With Hakeem Jeffries as Speaker
By Brian Freeman
Newsmax
January 4, 2023
As the House tries for a second day to elect a speaker and get down to the business of legislating, a group of those leading the opposition to selecting Rep. Kevin McCarthy for the position told the California Republican that they're even willing to have the vote go to a plurality with Democrat Rep. Hakeem Jeffries becoming speaker, Jake Sherman tweeted Wednesday.

Sherman, founder of Punchbowl News, wrote in the tweet that the group issuing the threat — including Reps. Matt Gaetz, R-Fla.; Lauren Boebert, R-Colo.; and Scott Perry, R-Pa. — told McCarthy in a private meeting Tuesday that they're willing to have Jeffries, D-N.Y., become the speaker, because, in any case, they will fight against him.