KLAYMAN: THIS ARTICLE EPITOMIZES THE DISHONEST CORRUPT LEFTIST MEDIA!
Order "It Takes a Counter-Revolution!" at Amazon.com
Donate and Support Freedom Watch at www.FreedomWatchUSA.org 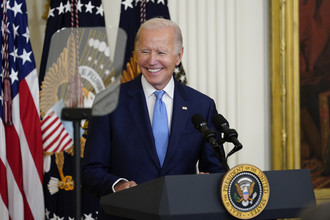 The People Who Said Biden Isn't Smart Are Looking a Bit Dumb
By John F. Harris
POLITICO
January 2, 2023
President Joseph Biden is striding out of summer 2022 in better position in almost every respect than when he slumped into it three months ago. Many in the political class, who had been consigning him to the electoral equivalent of hospice care, are squinting to find a root cause.

The old saw that it is better to be lucky than smart is partly true. Among the events that have helped Biden make the case for himself and his party, even as they were mostly or entirely out of his control, are the Supreme Court's decision revoking abortion rights, the global retreat of gas prices from their peaks earlier in the year, and former President Donald Trump's mounting legal problems and flailing response to them. Even recent legislative successes seemed powered by Democratic brokers on Capitol Hill rather than by the president's engagement.

But let's remember another sturdy maxim. "Good luck is what is left over after intelligence and effort have combined at their best," said baseball legend Branch Rickey. "Luck is the residue of design."