KLAYMAN: IT'S OPEN SEASON WITH BRAINDEAD, STUPID & BRIBED BIDEN AS "PRESIDENT!"
Order "It Takes a Counter-Revolution!" at Amazon.com
Donate and Support Freedom Watch at www.FreedomWatchUSA.org 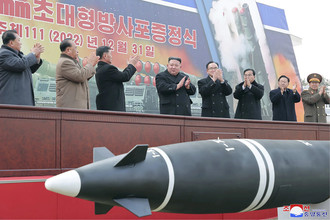 Kim's moves are in line with the broad direction of his nuclear program. He has repeatedly vowed to boost both the quality and quantity of his arsenal to cope with what he calls U.S. hostility. Some experts say Kim's push to produce more nuclear and other weapons signals his intention to continue a run of weapons tests and ultimately solidify his future negotiating power and win greater outside concessions.

"They are now keen on isolating and stifling (North Korea), unprecedented in human history," Kim said at a recently ended key ruling party meeting, according to the official Korean Central News Agency. "The prevailing situation calls for making redoubled efforts to overwhelmingly beef up the military muscle."