KLAYMAN: AS IF THE FEDERAL JUDICIARY IS NOT COMPROMISED ENOUGH WITH UNQUALIFIED AND CORRUPTED JURISTS: BIDEN VOWS AN AFFIRMATIVE ACTION JIHAD!
Order "It Takes a Counter-Revolution!" at Amazon.com
Donate and Support Freedom Watch at www.FreedomWatchUSA.org 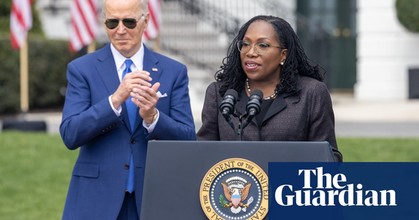 Biden administration poised to 'repair' judiciary after Senate majority
By Joan E Greve
the Guardian
December 31, 2022
US federal courts look quite different than they did two years ago. Since taking office, Joe Biden has made it a top priority to appoint a diverse slate of judicial nominees who have helped change the face of the nation's court system.

Democrats have used their narrow majority in the Senate to confirm roughly 100 of Biden's judicial nominees — including Justice Ketanji Brown Jackson, the first Black woman to serve on the supreme court. After maintaining control of the Senate in the midterm elections, Democrats are well positioned to confirm even more federal judges in the next two years. But even with the party's bolstered Senate majority, Biden has a long way to go before he can match Donald Trump's historic impact on the federal judiciary.