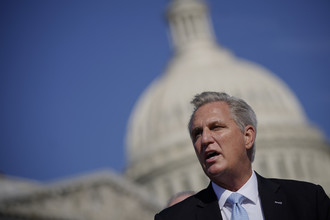 Conservatives' latest McCarthy ask: A broad Biden admin investigation
By Jordain Carney
POLITICO
December 30, 2022
House conservatives are upping their demands on Kevin McCarthy as he tries to lock down the speaker's gavel.

Their new price: a select committee with a huge scope of targets.

While the Republican leader and soon-to-be committee chairs have already lined up a laundry list of investigations that will largely command the House GOP's agenda next year, it's not enough for some McCarthy critics. Some of those opposing and on the fence about the Californian's speakership bid want him to start a new panel, one that could direct probes against the entities they've castigated for years, including the FBI, the Justice Department, the IRS and Anthony Fauci.