KLAYMAN: TRUMP ERRS BY CONTINUING TO ALIGN HIMSELF WITH REPUBLICAN PARTY! HE NEVER LEARNS!
Order "It Takes a Counter-Revolution!" at Amazon.com
Donate and Support Freedom Watch at www.FreedomWatchUSA.org 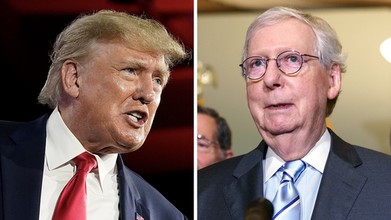 "Every single Republican should vote no on the ludicrous, unacceptable $1.7 trillion omnibus spending bill. It's a disaster for our country and it also happens to be a disaster for the Republican Party, because they could stop it," he said in a video posted on his social media platform, Truth Social.

He accused President Biden and the "radical Democrats" of trying to "ram through this monstrosity in the dark of night when no one has even had a chance to read its over 4,000 pages."