KLAYMAN: LOSER REPUBLICANS FOCUS ON SECURITY ON JAN. 6 NOT THE GESTAPO ARRESTS, BEATINGS, PROSECUTIONS AND JAILING OF PEACEFUL JAN. 6 PROTESTERS! EXAMPLE OF WHY THEY HAVE NO PRINCIPLES WHICH THEY WILL FIGHT FOR AND ARE NOT THE PARTY OF TRUE CONSERVATIVES!
Order "It Takes a Counter-Revolution!" at Amazon.com
Donate and Support Freedom Watch at www.FreedomWatchUSA.org 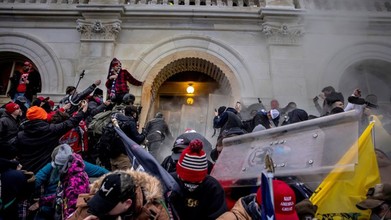 Their primary recommendation centers around reforming the US Capitol Police Board and bolstering congressional oversight of the Capitol Police force — two issues that were identified by lawmakers of both parties in the wake of the January 6 attack.