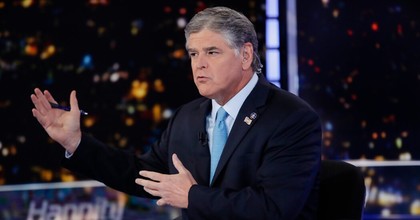 In Testimony, Hannity and Other Fox Employees Said They Doubted Trump's Fraud Claims
By Jeremy W. Peters
New York Times
December 22, 2022
On Nov. 30, 2020, Sean Hannity hosted Sidney Powell on his prime-time Fox News program. As she had in many other interviews around that time — on Fox and elsewhere in right-wing media — Ms. Powell, a former federal prosecutor, spun wild conspiracy theories about what she said was "corruption all across the country, in countless districts," in a plot to steal re-election from the president, Donald J. Trump.

At the center of this imagined plot were machines from Dominion Voting Systems, which Ms. Powell claimed ran an algorithm that switched votes for Mr. Trump to votes for Joseph R. Biden Jr. Dominion machines, she insisted, were being used "to trash large batches of votes."

Mr. Hannity interrupted her with a gentle question that had been circulating among election deniers, despite a lack of supporting proof: Why were Democrats silencing whistle-blowers who could prove this fraud?