KLAYMAN: REP. GAETZ IS RIGHT: THE DONALD HAS NOT LEARNED HIS LESSON! BAD PEOPLE AROUND HIM
Order "It Takes a Counter-Revolution!" at Amazon.com
Donate and Support Freedom Watch at www.FreedomWatchUSA.org 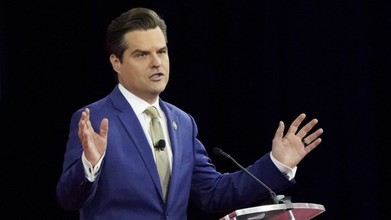 Gaetz jabs Trump over McCarthy support: 'HR was not always his best thing'
The Hill
December 20, 2022
Rep. Matt Gaetz (R-Fla.) voiced clear disagreement with former President Trump after he supported House Minority Leader Kevin McCarthy (R-Calif.) as the next Speaker, saying Trump has not chosen the "best people" to work for him in the past.

"HR was not always his best thing," Gaetz told the conservative network Real America's Voice on Monday at a Turning Point USA conference in Phoenix.

Gaetz added that Trump chose a "parade of horribles" to serve in his administration.