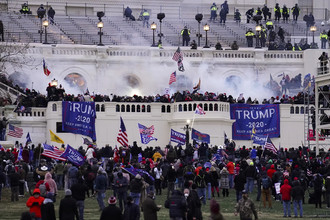 Prosecutor: Oath Keepers saw Jan. 6 as 'first battle' in war
AP NEWS
December 19, 2022
WASHINGTON (AP) — Four Oath Keepers charged with plotting to stop the transfer of presidential power from Donald Trump to Joe Biden accepted an "invitation to sedition" issued by the far-right extremist group's founder, a federal prosecutor said Monday at the start of a second trial for group leaders and members.

Rhodes is jailed awaiting sentencing and wasn't in court on Monday, but a prosecutor repeatedly brought up his name. Assistant U.S. Attorney Troy Edwards said Rhodes issued a "call to action" before his followers carried out a violent plot to stop Congress from certifying Biden's electoral victory.