KLAYMAN: REMOVE POPE FRANCIS INSTEAD, WHO HAS GIVEN COMMUNION TO PRO-ABORTIONISTS LIKE BIDEN & PELOSI AND CATERS TO THE ULTRA SOCIALIST LEFT: NOT FATHER FRANK PAVONE WHO HAS PRINCIPLES! 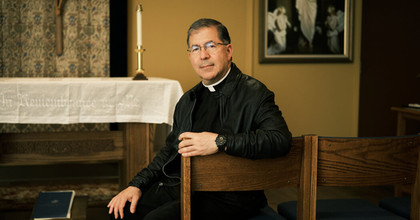 Vatican Removes Anti-Abortion Activist From the Priesthood
By Elizabeth Dias and Ruth Graham
New York Times
December 18, 2022
A well-known Catholic priest and incendiary leader of the anti-abortion movement was removed from the priesthood by the Vatican, according to a letter from Pope Francis' representative to the United States that was obtained by The New York Times.

Frank Pavone, who leads the advocacy organization Priests for Life, and was once a religious adviser to former President Donald J. Trump, was dismissed from the clergy on Nov. 9 with no possibility of appeal, the letter states. The letter included a statement about the removal, called laicization, that it said was approved by the Dicastery for the Clergy, a Vatican office.

"This action was taken after Father Pavone was found guilty in canonical proceedings of blasphemous communications on social media, and of persistent disobedience of the lawful instructions of his diocesan bishop," it states.