KLAYMAN: WHAT WAS PRESIDENT TRUMP'S "ATTEMPTED COUP"? TRYING TO PREVENT A STOLEN FRAUDULENT ELECTION BY THE DEMS & THE LEFT?
Order "It Takes a Counter-Revolution!" at Amazon.com
Donate and Support Freedom Watch at www.FreedomWatchUSA.org 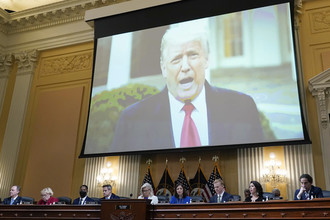 What to watch as Jan. 6 panel cites Trump's 'attempted coup'
AP NEWS
December 18, 2022
WASHINGTON (AP) — The House committee investigating the Capitol riot will make its final public presentation Monday about the unprecedented effort by Donald Trump to overturn the results of the presidential election he lost in 2020. The committee has called it an "attempted coup" that warrants criminal prosecution from the Justice Department.

That is expected to be the committee's closing argument as it wraps up a year-and-a-half-long inquiry and prepares to release a final report detailing its findings about the insurrection in the nation's capital on Jan. 6, 2021, as Congress was certifying Joe Biden's presidential victory. The committee of seven Democrats and two Republicans is set to dissolve at the end of the year.

Monday's meeting will be the committee's 11th public session since forming in July 2021. One of the first hearings, on June 9, was viewed by more than 20 million people.