KLAYMAN: REP. MCCARTHY IS A WEAK UNINTELLIGENT DISHONEST REPUB. ESTABLISHMENT CHARLATAN WHO WOULD HAVE HIS LUNCH EATEN AS HOUSE SPEAKER BY LEFTIST DEMS!
Order "It Takes a Counter-Revolution!" at Amazon.com
Donate and Support Freedom Watch at www.FreedomWatchUSA.org 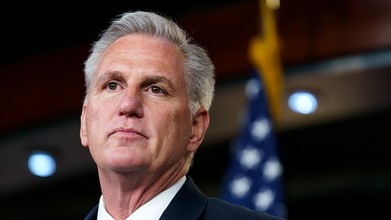 McCarthy says 5 GOP opponents have not moved
The Hill
December 17, 2022
House Minority Leader Kevin McCarthy (R-Calif.) on Friday said the five Republican lawmakers opposing his Speakership bid have not moved their stances, despite the two sides continuing conversations ahead of next month's floor vote.

"We're still continuing to talk, but they have not moved," McCarthy told conservative talk show host Hugh Hewitt during an interview on his radio show.

The comment comes 18 days before McCarthy's nomination for Speaker hits the House floor, where he will need support from a majority of those voting for a Speaker candidate on Jan. 3 to win the gavel.