KLAYMAN: DC BAR DISCIPLINARY COUNSEL HAMILTON FOX IS A DISHONEST LEFTIST POLITICAL HACK! HE NOT GUILIANI SHOULD BE DISBARRED!
Order "It Takes a Counter-Revolution!" at Amazon.com
Donate and Support Freedom Watch at www.FreedomWatchUSA.org 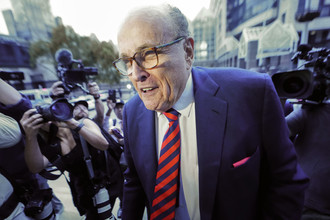 D.C. bar panel finds Giuliani violated attorney rules in bid to overturn 2020 election
By Kyle Cheney, Josh Gerstein
POLITICO
December 15, 2022
A bar discipline committee in Washington, D.C., has concluded that Rudy Giuliani violated at least one professional rule in his efforts to help former President Donald Trump challenge the results of the 2020 election — a preliminary finding that could result in the suspension or loss of his law license.

The three-member disciplinary committee agreed that Giuliani's handling of litigation in Pennsylvania crossed ethical lines. Their finding came after a week of testimony by Giuliani — who said Trump waived attorney-client privilege to permit him to testify — and some of his allies, including Trump advisers Bernie Kerik, Christina Bobb and Corey Lewandowski.