KLAYMAN: THE REAL AFFRONT TO THE CAPITOL IS NOT JAN. 6 BUT HANGING A TAXPAYER FUNDED PORTRAIT OF "THE WICKED WITCH OF THE LEFT!"
Order "It Takes a Counter-Revolution!" at Amazon.com
Donate and Support Freedom Watch at www.FreedomWatchUSA.org 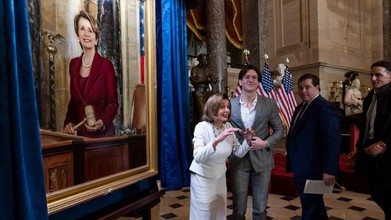 Boehner's tears, Obama's tribute highlight Pelosi's Capitol portrait unveiling
By Mariana Alfaro
Washington Post
December 15, 2022
A generation of congressional leaders fought back tears on Wednesday as they unveiled the official portrait of House Speaker Nancy Pelosi (D-Calif.), the first woman to hold the chamber's gavel, and the first to have her likeness immortalized in the Speaker's Lobby.

In her remarks, Pelosi thanked her colleagues for helping her craft such a storied congressional career, noting that she made history as the first female House speaker only because her caucus "had the courage to elect a woman."

"I'm honored to be the first, but it will only be a good accomplishment if I'm not the last," Pelosi said.