(Palm Beach, Florida, December 14, 2022). Today, Larry Klayman, the lead plaintiff on behalf of his public interest foundation, Freedom Watch — formerly known as the International Center for Economic Justice — defeated the motion to dismiss filed by the defendants, the PGA Tour and its commissioner Jay Monahan, in the consumer class action complaint filed in Palm Beach County, Florida. Freedom Watch's mission, in addition to pursuing justice, is to promote free and fair economic competition.

The Second Amended Complaint at issue in the case styled (Klayman v. PGA Tour et. al 50-2022-CA-006587, 15th Jud. Cir., Palm Beach County) can be viewed at www.freedomwatchusa.org. It joins along with the PGA Tour and Monahan the DP World Tour, the Official World Golf Ranking ("OWGR"), and NBC's Golf Channel, for allegedly colluding and conspiring in violation of Florida's antitrust and competition laws, to restrain trade in the golf industry. As the Second Amended Complaint alleges, due to the Defendants' anticompetitive conduct, Klayman and other golf fans, who are consumers in Florida, have been harmed due to the reduced competition, causing the price of admission tickets and concessions for and at PGA tournaments to increase greatly for the golfing consumer.

Mr. Klayman had this to say after the Court ruled against the PGA Tour and its Commissioner Jay Monahan:

"This is the first time that the PGA Tour and Monahan have 'taken it on the chin' and lost a motion to dismiss an antitrust complaint filed against them. What is significant is that this case will now proceed to discovery, and for the first time, the PGA Tour and its commissioner will be held accountable for anticompetitive conduct. The whole truth will now be exposed for all to see and hear. The Court's ruling is thus a major victory for golf fans, and by extension LIV Golf, whose players have been defamed and trashed by the defendants with their captive purveyors of fake news in the golf media, such as NBC's Golf Channel, the PGA Tour's admitted incestuous partner. Let justice ring!"

THE COURT ORDER DENYING THE PGA TOUR'S/MONAHAN'S MOTION TO DISMISS IS BELOW.

For more information and/or an interview contact at Asher.andersonfw@gmail.com 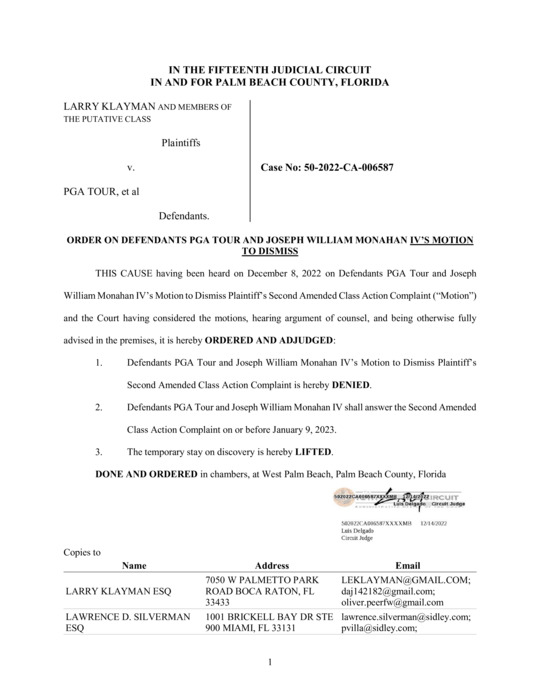