KLAYMAN: THE DEM AND REPUB "MAFIAS" ARE ALREADY HARD AT WORK TO DESTROY SINEMA! THEY DO NOT TOLERATE COMPETITION OF THEIR CORRUPT CABAL!
Order "It Takes a Counter-Revolution!" at Amazon.com
Donate and Support Freedom Watch at www.FreedomWatchUSA.org 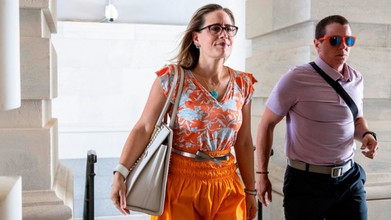 Kyrsten Sinema's potential 2024 run creates anxiety in Senate Democratic ranks | CNN Politics
By Manu Raju, Lauren Fox, Ted Barrett
CNN
December 13, 2022
Sen. Kyrsten Sinema's surprise decision to become an independent has Democratic leaders struggling to answer a basic question: How should they deal with her if she runs for reelection in Arizona?

In interviews with top party leaders and rank-and-file members on Monday, Democrats were sidestepping the sensitive question and handling the politically fraught situation delicately, knowing that a misstep could backfire and have serious ramifications for their party.