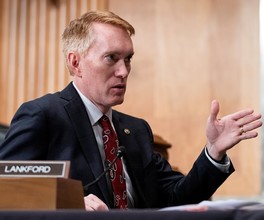 Sen. Lankford to Newsmax: Biden Upped Ante for Prisoner Swaps
Newsmax
December 8, 2022
Sen. James Lankford, R-Okla., told Newsmax on Thursday that President Joe Biden "has upped the ante for what it takes to get someone out of Russia."

The exchange deal did not include Paul Whelan, a former U.S. Marine who has been held prisoner in Russia for nearly four years.