KLAYMAN: SADLY THE DEMOCRAT MARXIST JEWISH LEFT IS REVIVING AND STOKING ANTI-SEMITISM WITH ITS SUPPORT FOR BIDEN'S AND HARRIS' SOCIALIST VIRTUAL DICTATORSHIP!
Order "It Takes a Counter-Revolution!" at Amazon.com
Donate and Support Freedom Watch at www.FreedomWatchUSA.org 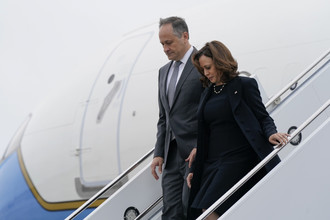 The White House roundtable on Wednesday follows a surge in anti-Jewish vitriol spread by a famous rapper, an NBA star and other prominent people.

Emhoff is the first Jewish person among the top four officials — the president, vice president and their spouses — in the executive branch of government, and he has become increasingly outspoken about growing bias toward adherents of the Jewish faith, and hate at large, in the U.S.