KLAYMAN: THE REAL "BIG LIE" IS THAT "BRAINDEAD CRIMINAL JOE" WON THE 2020 PRESIDENTIAL ELECTION!
Order "It Takes a Counter-Revolution!" at Amazon.com
Donate and Support Freedom Watch at www.FreedomWatchUSA.org 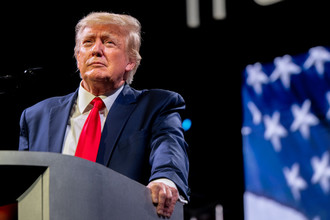 "The Constitution brings the American people together — regardless of party — and elected leaders swear to uphold it," White House spokesperson Andrew Bates said. "Attacking the Constitution and all it stands for is anathema to the soul of our nation, and should be universally condemned."

Earlier, in a post on his Truth Social network, the former president had called for the "termination" of constitutional laws, while citing conspiracy theories about the presidential election he lost.