KLAYMAN: VERY WELL SAID! REPUBLICAN ESTABLISHMENT DOES NOT REPRESENT CONSERVATIVES AND PEOPLE OF FAITH!
Order "It Takes a Counter-Revolution!" at Amazon.com
Donate and Support Freedom Watch at www.FreedomWatchUSA.org 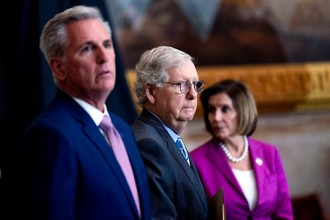 Republican establishment to conservative and faith-based voters: 'Drop dead'
The Hill
November 28, 2022
On Oct. 30, 1975, after then-President Gerald Ford declared that he would veto any bill calling for "a federal bailout of New York City," the New York Daily News ran a story with the now-famous headline: "Ford to City: Drop Dead."

For years now, many conservatives and people of faith have felt that the entrenched Republican establishment and GOP "leadership" continually conveys the same message when it comes to the party following up on campaign promises made to those voting blocs.

Once reelected, and often because of conservative and faith-based voters, those establishment Republicans and their leadership would stab those constituencies in the back as they cozied up to corporate America, lobbying firms, Big Tech, the mainstream media, and any special interests who might fund their campaigns or hire them once they left Congress.