KLAYMAN: MCCARTHY IS A LOW IQ WORTHLESS RINO FRAUD! TYPICAL OF REPUBLICAN ESTABLISHMENT AND WHY IT LOST MIDTERMS!
Order "It Takes a Counter-Revolution!" at Amazon.com
Donate and Support Freedom Watch at www.FreedomWatchUSA.org 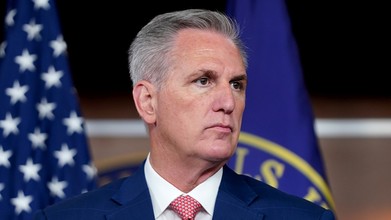 WHIP LIST: McCarthy searches for 218 GOP Speakership votes
The Hill
November 25, 2022
A narrower-than-anticipated House Republican majority and a growing number of House Republicans expressing opposition to House Minority Leader Kevin McCarthy (R-Calif.) are threatening to derail his bid to be Speaker of the House.

McCarthy won his party's nomination for Speaker this month but needs to secure a majority of all those casting a vote for a specific candidate in a Jan. 3 House floor vote in order to officially be elected Speaker.

Support from 218 House Republicans, marking a majority of the House, would shore up his position.