KLAYMAN: AG MERRICK GARLAND IS A MEMBER OF THE MARXIST JEWISH LEFT AND FREEDOM WATCH HAS NOT ONLY SUED HIM FOR JAN. 6 PEACEFUL PROTESTERS BUT IS ALSO PURSUING ITS OWN CITIZEN GRAND JURY INDICTMENT AND CRIMINAL TRIAL TO HOLD HIM ACCOUNTABLE FOR TURNING THE DOJ INTO A MODERN DAY "GESTAPO"!
Order "It Takes a Counter-Revolution!" at Amazon.com
Donate and Support Freedom Watch at www.FreedomWatchUSA.org 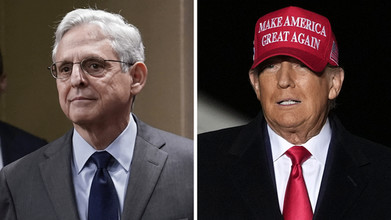 Could Merrick Garland use the Fourteenth Amendment to bar Trump from the presidency?
The Hill
November 25, 2022
Two days after Donald Trump announced his campaign for the 2024 presidential election, Attorney General Merrick Garland said he was appointing a special counsel to investigate possible crimes relating to Trump's taking of classified documents to his Florida residence at Mar-a-Lago, and with respect to Trump's actions related to the Jan. 6 riot at the U.S. Capitol.

The timing was no coincidence. "Based on recent developments, including the former president's announcement that he is a candidate for president in the next election and the sitting president's stated intention to be a candidate as well, I have concluded that it is in the public interest to appoint a special counsel," explained Garland.