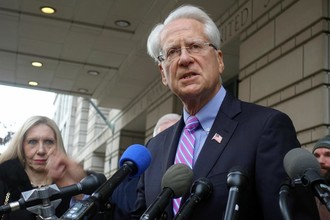 By Adam Woodard
Yahoo News
November 15, 2022
Attorney Larry Klayman announced the filing of a Second Amended Class Action Complaint in Palm Beach County's 15th Judicial Circuit on Monday which alleges antitrust conspiracy to restrain trade and harm golf fans in the state of Florida, as well as "eliminate LIV Golf in its infancy."

Named in the court filing are the PGA Tour, the DP World Tour Golf Channel and the Official World Golf Ranking (OWGR).

The OWGR is alleged to be part of a conspiracy to restrain trade in violation of Florida's antitrust laws because its board contains "the conflicted leadership of the PGA Tour and DP World Tour." PGA Tour commissioner Jay Monahan and DP World Tour chief executive Keith Pelley are both on the OWGR board.