KLAYMAN: PENCE HAS THE DEMEANOR OF A "CIGAR STORE INDIAN!" WOODEN AND CAN'T CONNECT WITH THE PEOPLE!
Order "It Takes a Counter-Revolution!" at Amazon.com
Donate and Support Freedom Watch at www.FreedomWatchUSA.org 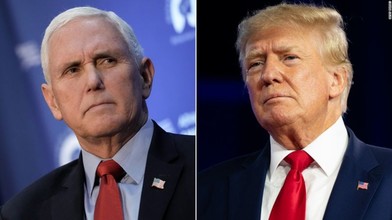 Pence details fracture with Trump over his refusal to overturn 2020 election in new book | CNN Politics
By Eric Bradner, Jeremy Herb, Jennifer Hansler, Maegan Vazquez, Nikki Carvajal, Veronica Stracqualursi, Kit Maher
CNN
November 15, 2022
Former Vice President Mike Pence wrote in his new memoir that former President Donald Trump warned him days before the January 6, 2021, attack on the US Capitol that he would inspire the hatred of hundreds of thousands of people because he was "too honest" to attempt to overturn the results of the 2020 election.

The comments are part of the vivid ending of Pence's new memoir, "So Help Me God." It's being released as Trump prepares what an aide has said will be the launch of his 2024 presidential campaign Tuesday night at Mar-a-Lago.

Pence has also hinted at his own potential 2024 run, recently telling ABC News he thinks "we'll have better choices in the future" than Trump. But in his memoir, he largely defends Trump — touting the former president's achievements, downplaying controversies and excusing Trump's personal vendettas, including against the late Arizona Sen. John McCain.