KLAYMAN: BRIBER AND BRIBEE! CRIMINALS BOTH!
Order "It Takes a Counter-Revolution!" at Amazon.com
Donate and Support Freedom Watch at www.FreedomWatchUSA.org 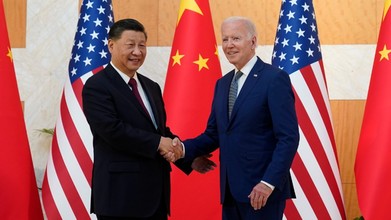 White House reporter was grabbed and shoved after human rights question in Bali
The Hill
November 15, 2022
A White House pool TV producer was knocked off balance and pushed by a man wearing a white mask with the Chinese flag on it as she asked President Biden whether he would talk about human rights in his upcoming meeting with Chinese President Xi Jinping in Indonesia.

The man "instantly" moved to yank the producer "backwards by the backpack," causing her to lose balance, according to a Monday pool report from AFP's Sebastian Smith.

The producer, who had asked her question as press were being ushered from the room, was then pushed toward the door, but two White House staff members stepped in to say she should be left alone, according to the report.