'LOOKS CAN BE DECEIVING,' DOJ ARGUES AT TRIAL OF JAN. 6 RIOTER CHARGED WITH AIDING PELOSI LAPTOP THEFT
Order "It Takes a Counter-Revolution!" at Amazon.com
Donate and Support Freedom Watch at www.FreedomWatchUSA.org 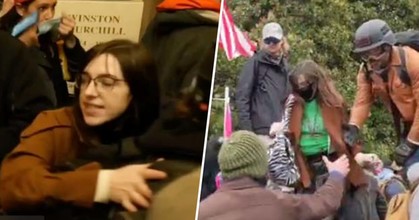 NBC News
November 9, 2022
Riley Williams is facing eight counts in connection with the theft of a laptop from House Speaker Nancy Pelosi's conference room during the Jan. 6 attack.

Riley June Williams, a 23-year-old Pennsylvania woman affiliated with the extremist "Groyper" movement, is facing eight counts in connection with the Jan. 6 attack. Opening statements in Williams' trial began Tuesday after the jury was seated. The jury is mostly white, with one Black male among the 12 jurors and two alternates.