KLAYMAN: THIS POLICE OFFICER IS A HERO: BUT A CORRUPT DOJ, COMPROMISED LEFTIST DC JURY AND PARTISAN BIASED DC FEDERAL JUDGE WILL HAVE HIM BURN!
Order "It Takes a Counter-Revolution!" at Amazon.com
Donate and Support Freedom Watch at www.FreedomWatchUSA.org 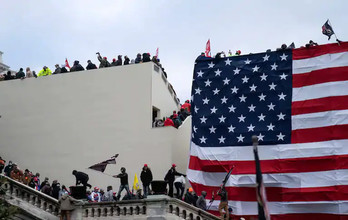 U.S. Capitol Police officer convicted of obstructing Jan. 6 probe
By Tom Jackman
Washington Post
October 30, 2022
About two weeks after he went into the U.S. Capitol on Jan. 6, 2021, and posted extensively about it on Facebook, Virginia Beach fishing boat captain Jacob Hiles was arrested. In speaking with the FBI, Hiles mentioned something that caught the attention of investigators, according to court records: "following the riot he had become friends with a Capitol police officer."

The FBI then took a look at Hiles's phone, and found a screenshot of a Facebook message sent to Hiles by U.S. Capitol Police Officer Michael A. Riley on Jan. 7. "Hey Jake," Riley wrote, "im a capitol police officer who agrees with your political stance. Take down the part about being in the building they are currently investigating and everyone who was in the building is going to be charged. Just looking out!"

Riley and Hiles continued to message until Hiles's arrest, court records show. Then Riley deleted all of his messages with his Facebook friend, whom he'd never met in person. In August 2021, Riley was indicted on two felony counts of obstructing a federal grand jury, for his original message to Hiles and the deletion of their conversations.