KLAYMAN: SAUDIS SHOULD BE APPLAUDED: BY RAISING PRICE OF OIL BY CUTTING PRODUCTION BIDEN AND DEMS WILL SUFFER LANDSLIDE DEFEAT IN FALL ELECTIONS! SAUDIS AWARE BIDEN AND DEMS ARE SELLING THEM OUT IN IRAN NUCLEAR DEAL TALKS!
Order "It Takes a Counter-Revolution!" at Amazon.com
Donate and Support Freedom Watch at www.FreedomWatchUSA.org 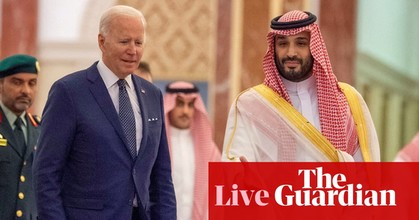 Biden open to re-evaluating Saudi relationship after Opec+ cuts, says White House -- as it happened
the Guardian
October 11, 2022
President Joe Biden will consider working with Congress to change the United States' relationship with Saudi Arabia amid outrage over its support for an oil production cut that was seen as partial to Russia, a White House spokesman said.

The comments from John Kirby, spokesman for the Biden administration's national security council, largely reiterate what the president said last week, when the Opec+ bloc of oil producers, in which Saudi Arabia plays a leading role, announced they would reduce production by 2 million barrels per-day, even as countries struggle with energy prices that have spiked since Russia invaded Ukraine.