KLAYMAN: THE SAUDIS ARE SMART: BY RAISING THE PRICE OF OIL THE DEMS WILL BE BLOWN OUT IN NOVEMBER: THEY SEE BIDEN AND THE DEMS AS ADVERSARIES OVER IRAN AGREEMENT!
Order "It Takes a Counter-Revolution!" at Amazon.com
Donate and Support Freedom Watch at www.FreedomWatchUSA.org 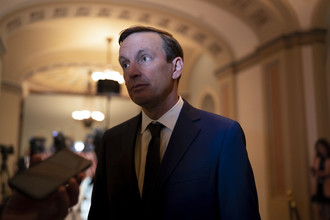 Chris Murphy on Saudi Arabia: 'There's got to be consequences'
By Olivia Olander
POLITICO
October 10, 2022
The United States should "rethink" arms sales to Saudi Arabia, following the kingdom's support for Russia in the war against Ukraine, Sen. Chris Murphy (D-Conn.) said Sunday.

"For years, we've looked the other way as Saudi Arabia has chopped up journalists, has engaged in massive political oppression, for one reason: We wanted to know that when the chips were down ... the Saudis would choose us instead of Russia," Murphy said on ABC's "This Week." "Well, they didn't."

He added, "There's gotta be consequences for that."