KLAYMAN: ARROGANCE OF MONAHAN AND PGA TOUR WILL BRING BOTH DOWN OVER THEIR ANTI-COMPETITIVE ACTIONS TO DESTROY LIV GOLF, LIV PLAYERS AND HARM FANS!
Order "It Takes a Counter-Revolution!" at Amazon.com
Donate and Support Freedom Watch at www.FreedomWatchUSA.org 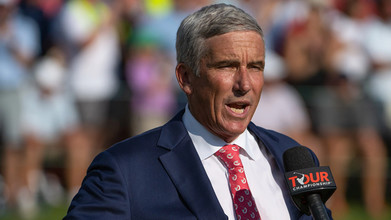 Hoping for a PGA Tour-LIV truce? 'Off the table,' Jay Monahan says
Golf Channel
September 22, 2022
Jay Monahan was asked if he could see any sort of peace or alliance between the two tours, he quickly dismissed the idea.

"Listen, I think I've been pretty clear on this: I don't see it happening," Monahan said. "When you look at where we are, and you think about words and actions, we're currently in a lawsuit, so coming together and having conversations, to me, that card is off the table, and it has been for a long period of time."

Monahan was then asked what was a bigger obstacle in the Tour working with LIV: golf or geopolitical?