KLAYMAN: WASHINGTON DC IS A CRIME SCENE NOT JUST WITH REGARD TO POLITICIANS!
Order "It Takes a Counter-Revolution!" at Amazon.com
Donate and Support Freedom Watch at www.FreedomWatchUSA.org 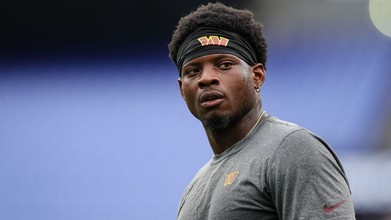 Commanders' Robinson shot in possible robbery
ESPN.com
August 29, 2022
Commanders rookie running back Brian Robinson is being treated at a hospital for non-life-threatening injuries after he was shot multiple times Sunday evening during a possible attempted robbery in Washington, D.C., according to a police spokesperson.

He was taken to a hospital with what the team called "non-life-threatening injuries." According to a team spokesman, co-owners Dan and Tanya Snyder, president Jason Wright, coach Ron Rivera, team physician Dr. Anthony Casolaro and clinical psychologist Dr. Barbara Roberts were at the hospital with Robinson.

"I just got done visiting w/Brian," Rivera said in a tweet Sunday night. "He is in good spirits and wanted me to thank everyone for their kind words, prayers & support. He wants his teammates to know he appreciates them all for reaching out and he loves them all & will be back soon doing what he does best."