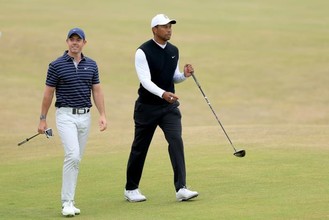 By Tod Leonard
GolfDigest.com
August 27, 2022
The lawyer who is representing Patrick Reed in his defmation lawsuit against Golf Channel and Brandel Chamblee has two new high-profile targets for more legal proceedings: Tiger Woods and Rory McIlroy.

According to a press release posted Wednesday on the Freedom Watch website that he owns, attorney Larry Klayman gave the courts in Florida's Palm Beach County notice that he would subpoena for deposition Woods and McIlroy in regards to the players-only meeting that was held prior to the BMW Championship in Wilmington, Del., on Aug. 16. The release said Woods is noticed for deposition on Sept. 21, 2022, followed a day later by McIlroy—both in their current hometown of Jupiter, Fla.