KLAYMAN: TOO BAD ASHLEY BIDEN DIARY WASN'T STOLEN IN LA, NYC OR A CITY LIKE PHILLY WHERE STEALING IS PEACHY KEEN THANKS TO DEM/SOROS DISTRICT ATTORNEYS!
Order "It Takes a Counter-Revolution!" at Amazon.com
Donate and Support Freedom Watch at www.FreedomWatchUSA.org 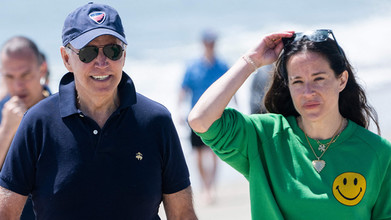 Man, woman plead guilty to stealing Ashley Biden diary, selling it to Project Veritas
By Danielle Wallace
Fox News
August 26, 2022
Two Florida residents pleaded guilty in federal court in New York City on Thursday to stealing the diary and other possessions of President Biden's daughter, Ashley, and selling them to the conservative group Project Veritas during the final weeks of the 2020 presidential election.

Aimee Harris and Robert Kurlander pleaded guilty before U.S. Magistrate Judge Sarah L. Cave to conspiracy to commit interstate transportation of stolen property involving the theft of personal belongings of an immediate family member of a then-former government official who was a candidate for national political office.