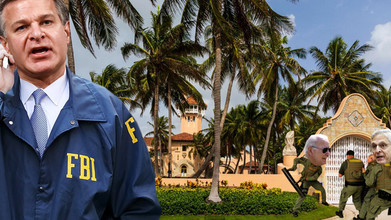 (August 24, 2022) Larry Klayman, Esq., the founder of both Judicial Watch and now Freedom Watch, former federal prosecutor and current chairman and general counsel of Freedom Watch and its Citizens' Prosecutor, has announced that he will seek the indictment of Attorney General Merrick Garland, FBI Director Christopher Wray, and President Joe Biden, all of which were involved in the procedures carried out leading to the alleged illegal raid on President Trump's Mar-A-Lago Residence.

The Department of Justice and the FBI, which has become like a "gestapo" under the Biden-Harris administration, allegedly conducted an illegal and unconstitutional raid on President Trump's Mar-A-Lago residence. This alleged illegal and unconstitutional raid will be put before Freedom Watch's citizens grand jury for them to decide whether to indict Attorney General Merrick Garland, FBI Director Christopher Wray, and President Joe Biden.

For more information about our citizens grand juries and trials, go to www.freedomwatchusa.org.

Contact Asher immediately at Asher.andersonfw@gmail.com for more information on how to join the Freedom Watch Citizens' Grand Jury.