KLAYMAN: OF COURSE: THE DOJ AND ITS FBI LETS PELOSI AND HER FAMILY SKATE FROM NUMEROUS CRIMES INCLUDING INSIDER TRADING AND INFLUENCE PEDDLING! BIRDS OF A FEATHER!
Order "It Takes a Counter-Revolution!" at Amazon.com
Donate and Support Freedom Watch at www.FreedomWatchUSA.org 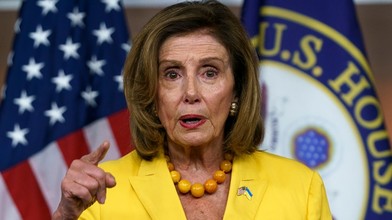 Pelosi calls on Republicans to tone down attacks on FBI
The Hill
August 13, 2022
Speaker Nancy Pelosi (D-Calif.) on Friday urged Republicans to cease their attacks on the FBI and other law enforcement, suggesting the rhetoric has heightened the threat of violence against public officials.

A number of GOP lawmakers have gone after the FBI in the wake of Monday's search by the agency into classified documents allegedly held by former President Trump at his South Florida resort, Mar-a-Lago.

During a press briefing in the Capitol, Pelosi denounced Trump's history of bashing the FBI and other law enforcement agencies, saying the threat to public officials, including members of Congress, has been "exacerbated by the statements of the [former] president."