KLAYMAN: NO THE NATION IS ON THE PRECIPICE OF DESTRUCTION THANKS TO BIDEN AND THE LEFT AND DISHONEST MEDIA LIKE THE WASHINGTON POST!
Order "It Takes a Counter-Revolution!" at Amazon.com
Donate and Support Freedom Watch at www.FreedomWatchUSA.org 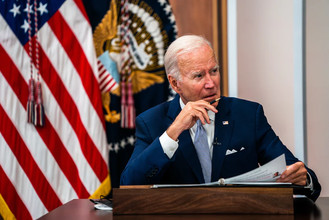 Historians privately warn Biden that America's democracy is teetering
By Michael Scherer, Ashley Parker and Tyler Pager
Washington Post
August 11, 2022
President Biden paused last week, during one of the busiest stretches of his presidency, for a nearly two-hour private history lesson from a group of academics who raised alarms about the dire condition of democracy at home and abroad.

The conversation during a ferocious lightning storm on Aug. 4 unfolded as a sort of Socratic dialogue between the commander in chief and a select group of scholars, who painted the current moment as among the most perilous in modern history for democratic governance, according to multiple people familiar with the discussions who spoke on the condition of anonymity to describe a private meeting.

Comparisons were made to the years before the 1860 election when Abraham Lincoln warned that a "house divided against itself cannot stand" and the lead-up to the 1940 election, when President Franklin D. Roosevelt battled rising domestic sympathy for European fascism and resistance to the United States joining World War II.