KLAYMAN: I DON'T ADVOCATE VIOLENCE BUT APPARENTLY WRAY AND HIS INNER-CLIQUE OF FBI "YES MEN" SPECIAL AGENTS DO! TYRANNY WORSE THAN KING GEORGE III'S RED COATS!
Order "It Takes a Counter-Revolution!" at Amazon.com
Donate and Support Freedom Watch at www.FreedomWatchUSA.org 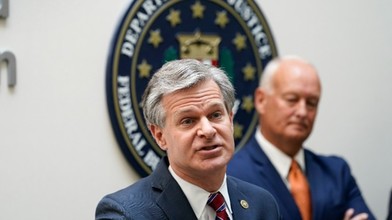 FBI's Wray denounces threats following search of Trump home
The Hill
August 11, 2022
OMAHA, Neb. (AP) — The director of the FBI had strong words Wednesday for supporters of former President Donald Trump who have been using violent rhetoric in the wake of his agency's search of Trump's Mar-a-Lago home.

Christopher Wray, who was appointed as the agency's director in 2017 by Trump, called threats circulating online against federal agents and the Justice Department "deplorable and dangerous."

"I'm always concerned about threats to law enforcement," Wray said. "Violence against law enforcement is not the answer, no matter who you're upset with."