Patriot Advisory
WATCH THIS VIDEO OF THE ON-GOING CRIMINAL TRIALS OF JOE, HUNTER, JAMES BIDEN & ANTHONY FAUCI
We the People Are Meting Out Justice as Government and Federal Judicial Cover-up Continues of Alleged Crimes by the Ruling Elite Establishment of Both Parties

(August 4, 2022). Today, Freedom Watch, Inc., and its Citizens' Prosecutor Larry Klayman, the founder of both Judicial Watch and Freedom Watch, a former Justice Department prosecutor, and current chairman and general counsel of Freedom Watch, Inc., released an excerpt of the on-going criminal trials, which began on July 13, 2022, of Joe, Hunter and James Biden and Dr. Anthony Fauci.

Joe, Hunter and James Biden had been indicted by a Freedom Watch citizens' grand jury for alleged bribery from Communist China, Russia and Ukraine, among other criminal charges, and Joe Biden for negligent homicide with regard to Afghanistan.

Dr. Anthony Fauci had been indicted by a Freedom Watch citizens' grand jury for negligent homicide in the deaths of over six million persons in the United States and worldwide, among other criminal charges.

The trials of the Bidens and Fauci are continuing, as more evidence comes to light every day implicating them in alleged criminal activity.

Please view the embedded excerpts of these on-going trials, which explain the peaceful and legal procedures under the laws of man and God's law, to hold these alleged criminals accountable to the rule of law.

Other alleged criminals who have been indicted both in government and the judiciary will follow, but these on-going trials of the Bidens and Fauci have been put at the forefront since these persons continue to commit crimes that are endangering not just the survival of the nation, but ordinary citizens and their loved ones and families.

Once completed these trials in their entirely can be viewed at www.freedomwatchusa.org. Also available on this website now are the citizens' grand jury proceedings which gave rise to the indictments of the Bidens and Fauci, as well as other alleged government and federal judicial criminals.

Citizen justice is necessary as the nation's Biden-Harris Justice Department has been totally and irreparably corrupted and turned into a literal Gestapo of the Biden-Harris regime, which controls it under the corrupt leadership of AG Merrick Garland and FBI Director Christopher Wray, who have also been sued civilly by Klayman on behalf of class action plaintiffs.

As just one example among many, the Biden-Harris Justice Department is currently engaged in an obvious cover-up of the alleged crimes of the Bidens, Fauci and others who are aligned with the Left and the Democrat Party. However, Republicans and others will be held to account as well, as the rampant alleged criminality among the nation's so-called leaders in Washington, D.C. and state capitals, and on the federal bench, is underscored by the inquisition underway of peaceful January 6, 2022, protesters. This government and judicial tyranny even spans both Democrat and Republican appointees to the federal bench, including Trump appointees, who have sanctioned the raiding of peoples' homes, turned a blind eye to threats against the populace, and are jailing persons without due process, and last but hardly least forcing confessions as occurs in dictatorships such as Iran, North Korea and Russia.

"The nation and its citizenry is under siege by lawless government and a federal judiciary who have become, as predicted by Founding Father and third American President Thomas Jefferson, the yes men and women of the ruling elite, who do as they please without legal accountability by corrupt establishment institutions of the three branches of government. The time for this tyranny to end is now, before the country is totally destroyed under a sea of deceit and lawlessness!", stated Klayman.

Klayman writes about this dire prediction by Jefferson, in which has come to pass, in his new book, "It Takes a Counter-Revolution: Wake Up America!", which can be obtained at www.freedomwatchusa.org and all major booksellers on line. In this book, Klayman lays out a concrete plan of peaceful and legal citizen action such as the indictments and on-going criminal trials of the Bidens, Fauci and others.

GO TO WWW.FREEDOMWATCHUSA.ORG TO JOIN OUR JUSTICE LEAGUE AND SUPPORT OUR CITIZENS LEGAL PROCEEDINGS TO BRING THESE ALLEGED CRIMINALS TO JUSTICE!

For more information or an interview of Citizens Prosecutor Klayman contact Asher Anderson at Asher.andersonfw@gmail.com

WATCH THIS VIDEO, WHICH IS EMBEDDED BELOW, NOW! 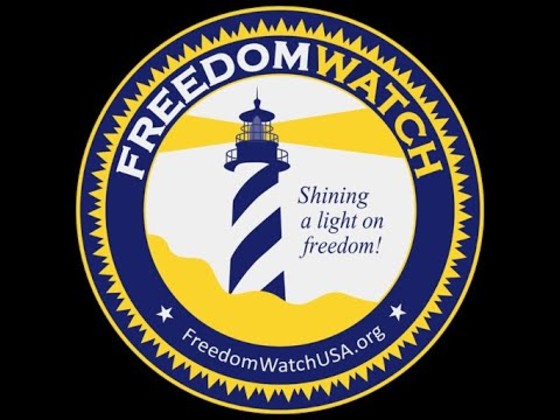