KLAYMAN: PGA TOUR AND GOLF CHANNEL READ THIS!
Donate and Support Freedom Watch at www.FreedomWatchUSA.org
Order "It Takes a Counter-Revolution!" at Amazon.com 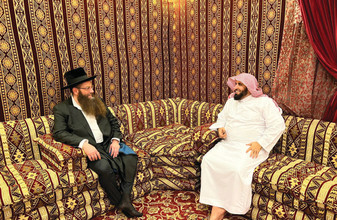 Meet Jacob Herzog, Saudi Arabia's self-proclaimed chief rabbi
The Jerusalem Post | JPost.com
July 24, 2022
Many Jews visited the Saudi Arabian city of Jeddah last weekend, mainly because of the summit between US President Joe Biden and the kingdom's Crown Prince Mohammed bin Salman. Behind the scenes, there was also an American-Israeli rabbi who made kiddush for the participants, mainly journalists and advisers of government officials who spent Shabbat in Saudi Arabia.

His name is Rabbi Jacob Herzog, and he is a 46-year-old Israeli rabbi who made aliyah from the US as a child. In the past year, he has been splitting his time between Saudi Arabia and Israel, becoming the unofficial chief rabbi of the huge Saudi Kingdom in the Arabian Peninsula.

It was just about four years ago that Herzog, an Israeli-American businessman, thought of traveling to Saudi Arabia. "A friend of mine told me that if I speak basic Arabic, and feel comfortable in the Middle East, I should go to Saudi Arabia," he told the Magazine in an interview in a Jerusalem restaurant. Four years later, he is the self-proclaimed "Chief Rabbi of the Kingdom of Saudi Arabia" and, as he defines himself, a "businessman, mohel and [promoter of] interfaith dialogue."